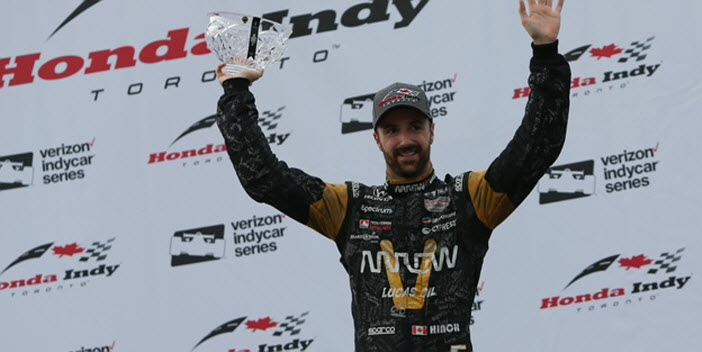 "This result is so great for the team," said Hinchcliffe. "We really struggled on the reds [Firestone alternate tires], and the yellow just came at the right time but we had the pace at the end there. We were catching Alex and Josef in that last stint. The car really came alive on the blacks so big thanks to Schmidt Peterson Motorsports, all the Arrow Electronics guys - great stops -- and all the fans in Toronto. I mean the support that we feel each and every year is amazing. You guys are the best! You came even when the weather wasn’t looking awesome and hung out with us and we appreciate it. So, thanks to all of you guys. Next year, maybe a couple of spots better."

Hinchcliffe began his homecoming race in sixth after making the Firestone Fast Six for the sixth time in 2017. Starting on the outside of the third-row, Hinch made his way to fourth-place on the first lap, passing Will Power and Scott Dixon.

The No. 5 Arrow Electronics SPM Honda team utilized a two pit-stop strategy, changing to the Firestone primary tire compound on Lap 22. As the 30-year-old Canadian settled in to his second stint, settling into fourth-place. Hinch would make his last pit stop on Lap 54, narrowly missing eventual race winner Josef Newgarden. Two laps later, he would inherit third-place after Graham Rahal would come to pit road. Hinch would go on to finish third, his third podium finish of 2017 and the 14th of his career.

Sebastian Saavedra’s SPM debut was also a bright spot for the team. The 27-year-old Colombian started the 85-lap contest in 20th after a tough break in qualifying. Despite the setback, he drove the No. 7 SPM Honda through the pack, making his way up to seventh. Saavedra would end up finishing 11th, his highest finish since Long Beach in 2015 where he finished tenth.

"I feel like that is a very successful weekend in the books," said Saavedra. "I’m very appreciative of the whole Schmidt Peterson Motorsports organization for taking me in and just making me feel like I’m home. I felt the same throughout the race and had a pretty solid car. We kept clean for the first stint, just tried to stay away from trouble, and when I started pushing, the car was there for me. Great strategy from the SPM guys and getting me out of those reds (Firestone alternate tires) and getting me some free time for me to do my thing. It played off perfectly with those yellows, and we managed to get in with the guys up front which changed the speed of the race for us. We had the car to do it. We’re proud of the pit stops, proud of the strategy and of course having a good car makes my life as a driver a lot easier."