Encouraged by government regulations worldwide, heavy-duty engine Original Equipment Manufacturers (OEMs) are working to achieve improved fuel economy and a reduction in greenhouse gas emissions. One of the ways that this can be partially achieved is through the use of lower High Temperature High Shear (HTHS) viscosity engine oils – but what is HTHS?


This white paper looks at:

HTHS viscosity is the way we measure the ability of fully warmed (150°C/302°F) oil to flow within the narrow confines of fast moving engine parts.


HTHS occurs in contact areas, such as the ring/liner interface, valve-train and gear contacts. Under SAE J300 Engine Oil Viscosity Classifications, this means under conditions of high shear between 1.0-1.4 x 106 sec-1, depending on the test method used.

When observed under normal operating temperatures (70 to 100°C/158 to 212°F), the HTHS viscosity of engine oil is inversely proportional to fuel economy performance. Academic research has shown that a lower HTHS potentially improves fuel economy at a rate of 0.5% to 2.0% for each 0.5 cP reduction in HTHS, depending on the engine type and operating conditions.


Too Low HTHS and Durability can be Affected

Decreased oil film thickness can lead to increased boundary lubrication and wear. It can also cause:

Engine oil keeps the vital internal hardware protected and helps ensure that the engine operates with maximum efficiency. The lifeblood of the engine, heavy-duty engine oil is essential to the smooth running of a fleet, but it’s important to find the right balance of protection and ease of movement – the oil needs to be thick enough to maintain the separation of critical parts, but thin enough to allow for fuel-efficient powering of the engine.


Sufficient HTHS viscosity creates a protective oil film between moving parts. This is critical for preventing engine wear in the ring/liner interface area.


HTHS viscosity is measured with ASTM test method number D4683. In this method, oil is introduced between a rotor and a stator at a prescribed temperature. For heavy-duty diesel engine oils, that temperature is set at 150°C (302°F). The rotor experiences a reactive torque caused by the oil’s resistance to flow (viscose friction) and this torque response level is used to quantify the HTHS viscosity.

The drive to improve fuel economy among engine manufacturers has been taking place for some time and to do this, the industry has been moving towards lower viscosity solutions, demonstrated by launch of API CK-4 and FA-4 oil categories in December 2016.


API FA-4 oils with lower HTHS offer potential increased fuel efficiency, but are be restricted to newer engines designed to run on these lower HTHS viscosity oils. This does exclude some older engines found in existing fleets as the oil was not designed for the older engine hardware.

Engine manufacturers may have begun to adapt their engine design to FA-4 requirements and enable end users to achieve the greater fuel economy provided by low HTHS viscosity oils.


API CK-4 oils with a HTHS viscosity equal to or greater than 3.5 would cover the heritage fleet, plus any new engines requiring higher HTHS viscosity for wear protection (typically off-highway usage).


In pursuit of the higher fuel economy, they offer:


These viscosity grades with significantly lower HTHS are only applicable to passenger car hardware at present.


The demand of higher fuel economy is only going to continue and as such, lubricant manufacturers are continually striving for lower HTHS viscosity oils. At Petro-Canada Lubricants, we’re asking ‘how low can we go?’ and testing oils at an HTHS viscosity below 2.9 cP. It’s still important to consider the balance between protection and ease and movement, but if we can demonstrate that a 0W-20 oil can protect as well as a 10W-30 or a 15W-40 and still provide the fuel economy benefits, it could be a real step forward in the future of engine oils.

All oils must enable engines to perform through a wide range of temperatures while minimizing wear. To achieve this, engine oil formulators rely on Viscosity Index Improvers (VII) to lessen temperature effects on viscosity and deliver the required performance in both low shear and high shear operating conditions. VIIs help regulate viscosity characteristics to ensure an appropriate balance between oil flow and oil film thickness.


VIIs are compositionally polymeric and can be sheared under stress via mechanical forces. This shearing is the main source of viscosity loss in an engine oil.


The automotive industry has adopted several tests to quantify engine oil’s performance over a broad range of temperature and shear conditions.

At low temperatures, VIIs work to resist the thickening of an oil, ensuring appropriate flow to and through an engine as designed. VIIs must be able to both improve cold flow characteristics as well as resist breakdown due to shearing. Low shear is encountered with oil flow in the lines and in the sump. When high shear is encountered, for example in the engine bearings, VIIs must deliver the much needed viscosity control to ensure adequate oil flow and protection to vital engine componentry.

At elevated temperatures, VIIs work to resist the thinning of an oil, ensuring appropriate film thickness and boundary lubrication throughout an engine. VIIs must be able to both improve high temperature viscometrics as well as resist breakdown due to shearing. At high temperatures, low shear conditions are seen in leak paths (oil seals, behind piston rings) and having too low a viscosity can affect oil consumption.

This test measures viscosity and indicates how thick the oil film is likely to be during severe high-speed operations in critical componentry. Oil that is too thin under these conditions may not provide the needed lubricant protection, which could result in significant wear to critical engine parts. 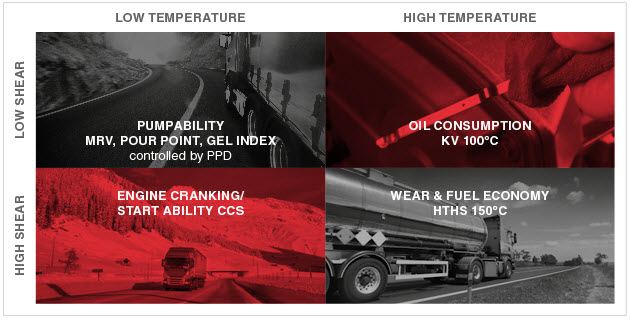 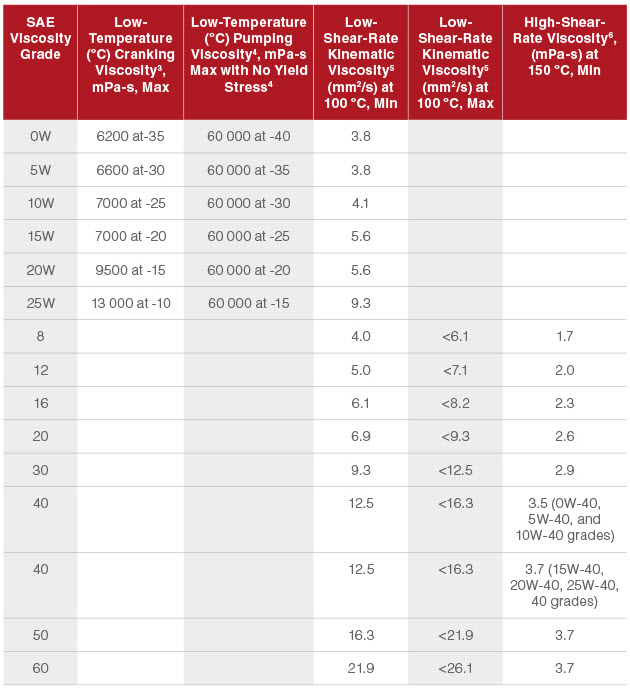 Impact of “In Use” Oil Degradation on HTHS

During normal operating cycles, oil viscosity is impacted by a number of physical and chemical processes, which in turn impact the HTHS value over time:


Well-formulated engine oils will minimize the change in viscosity and maintain a more stable HTHS viscosity value over the full drain interval.

Darryl Purificati is the OEM Technical Liaison at Petro-Canada Lubricants.

The Tougher. The Better. 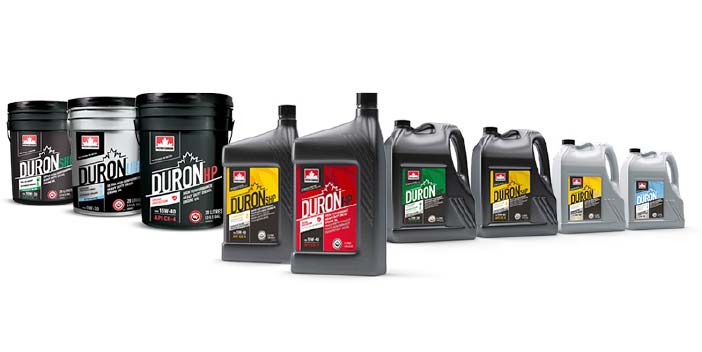 Petro-Canada Lubricants has revealed its API CK-4 and FA-4 product line, DURON™ next generation, which will be available to the market on Decemb...